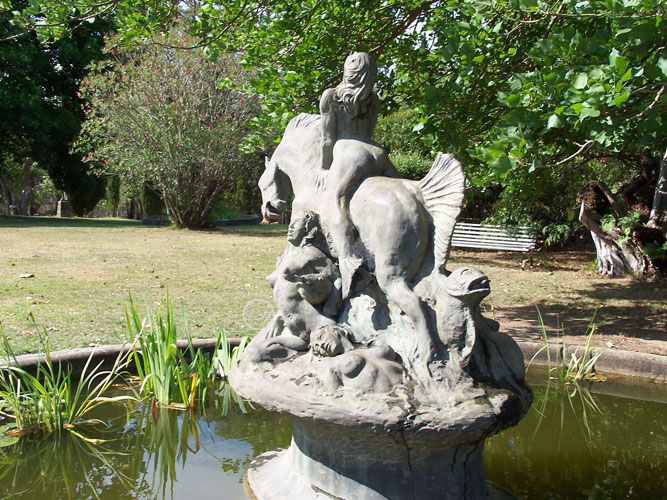 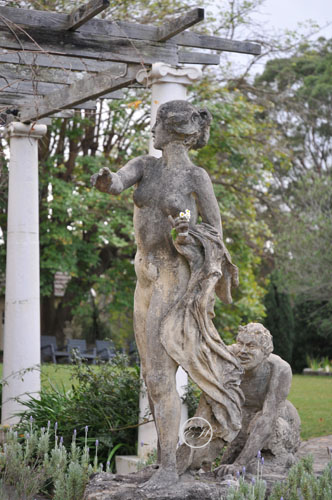 The Satyr and Nymph 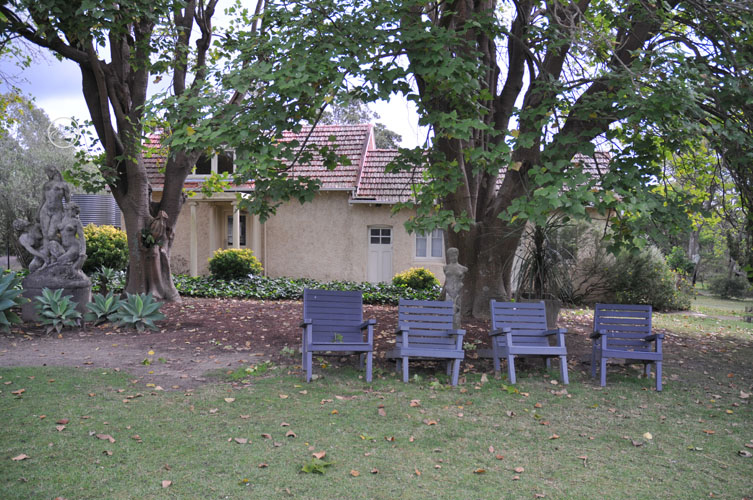 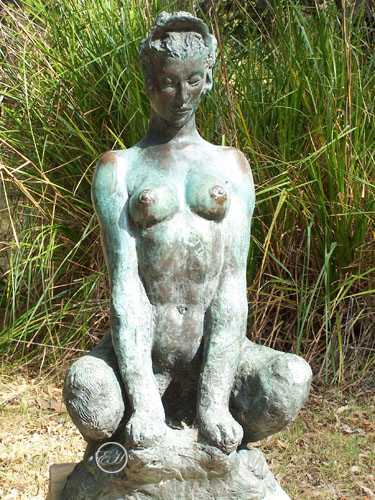 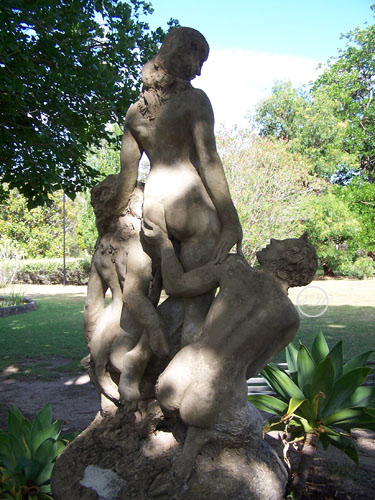 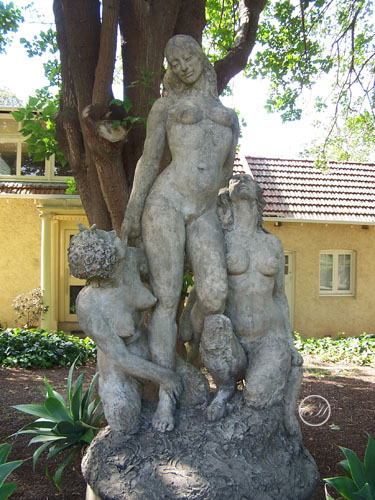 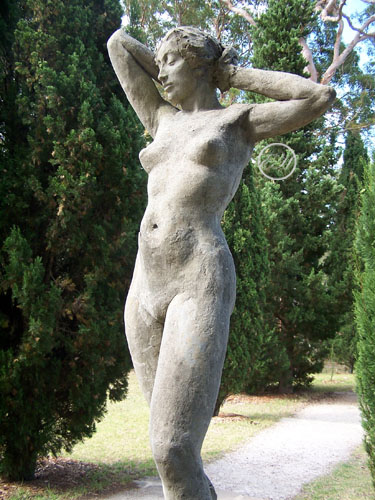 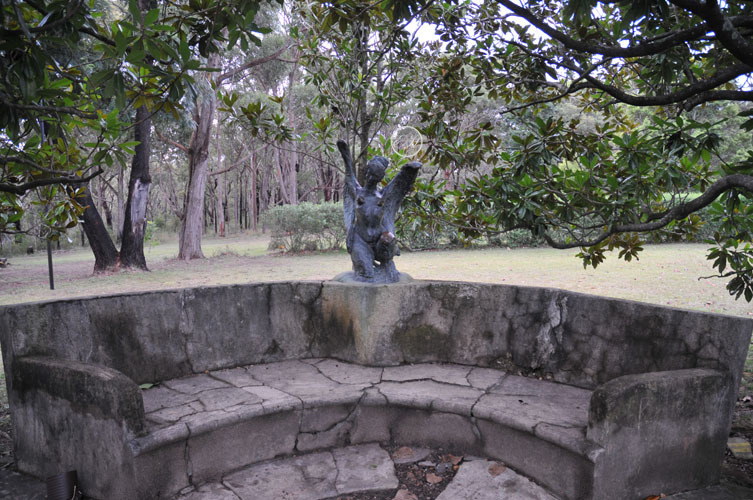 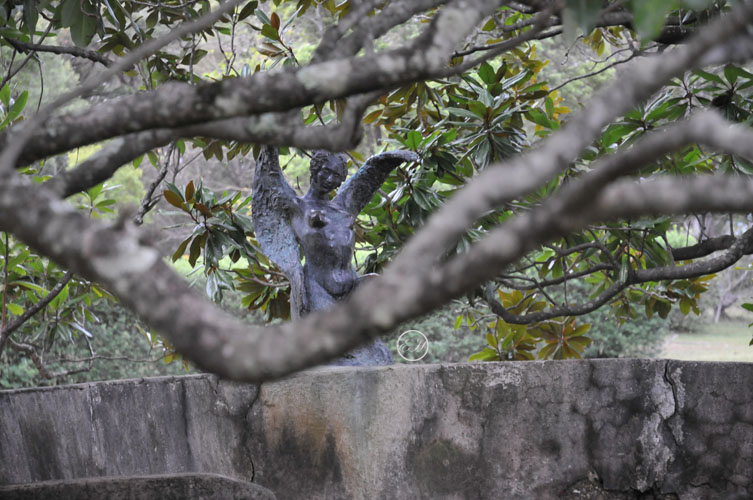 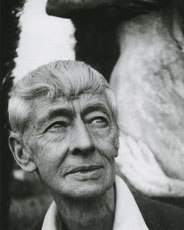 Norman Lindsay completed most of his sculptures between 1920 and 1940, but he was still actively working on some sculptures right up until his passing away in 1969.

These pieces at his home in Springwood NSW may be seen 7 days a week, you can spend the whole day at his home and garden and want to come back again and again, there is also a incredible display of paintings etchings as well as ceramics, model ships, watercolours and etchings. These images have been made available with kind permission form the estate management of the National Trust, the owners of this magnificent property and Australian heritage.

There are approximately fourteen sculptures, pots and urns in the garden at “Springwood”. All were made by Norman Lindsay during his stay on the property. All of the originals are made of concrete, which was built on to a metal armature.

In the 1980’s a decision was made to copy some of the sculptures to protect them from environmental and physical damage. The copies were made of bronze and the original works were moved inside the gallery.

Please be aware that sculptures were not given formal names so work titles are often simply descriptive.

Working on Normans sculptures was his way of relaxing, his first piece was completed in the gardens of Springwood; it was quickly followed by a satyr pursuing a nymph at the front of his Springwood home. As with many of his works Rose was his model for the nymph.

In the 1920’s the Greek Sphinx and The Sirens which lured sailors to their deaths began to appear in Lindsay’s sculpture. The first Sphinx was made in 1927 was small enough to decorate the radiator cap of Rose’s 1926 Vauxhall. Later, in 1943, he would create a large version on the pathway leading to the swimming pool. The Siren first appeared in 1926 and then again in 1928. All but the last of Lindsay’s sculptures were made by applying wet cement onto a metal frame. His final sculpture was from a full size plasticine model. There are also number of pots and urns crafted by Lindsay which found a home in his gardens.

During the 1930’s and 1940’s Lindsay decided he needed a ‘a fresh approach to art’ and began to focus on a series of large ‘gallery’ Oil paintings. He had dabbled with oils as early as the start of the 1900’s, His oil paintings included the large works based on history, mythology and literature, portraits and the smaller works where he focused on rich and contrasting colours. One Inch per 8 hours of painting was Normans average pace and he loved the southern light for contrast and accurate light.

Lindsay kept a book full of the names and contact details for models and kept most of them busy. But it was Rose in her early days and Rita later in his career that he considered his two most beautiful models. When he was unable to use live models he would refer to the pencil studies he had amassed over many years for the correct proportion and muscular definition. He was able to achieve more accurate skin tones with oils discovered it to be a medium in which his love of theatre and costume could be better expressed.

It is believed Lindsay made a total of fourteen model ships of witch there are several on display at his home. He claimed his interest in ships dated back to his early years when his family’s maid gave him a fully rigged model ship. Lindsay saw his Model ships have a way to relax and enjoy time away from his studios.

After the First World War Norman Alfred Lindsay began to experiment and develop his skills as a watercolourist. His association with artist Balmier Young provided him with a foundation from which to expand his skill, building up on the initial washes to become quite dramatic and detailed. His watercolours are often emotional and always captivating with the viewer’s eye drawn to all parts of the paper which has been carefully constructed. Each of Lindsay’s works inevitably tell the story of each of the many characters which are depicted. It is unknown exactly how many watercolours Lindsay produced, rather it is said he was ‘prolific’.

Lindsay had experimented with etchings as early as 1997, but it wasn’t until 1919 that he discovered the medium in earnest. The success of Lindsay’s etchings where due to both Norman and Rose combined skills, Rose was also widely recognised as a master printmaker. Together they published 200 etchings and at least 175 which were unpublished. The original etching editions had a maximum of 55 copies but a large number the plates failed before and the number produced was significantly less, this is due to the material used in those days where often genuine soft copper, to day you use a hardened material..

On 30 November 1974 Lin Bloomfield; founder of Bloomfield Galleries, in response to Lindsay’s original etchings becoming increasing unattainable, and after consultation with Jane Lindsay, released the first three folios of the facsimile etchings.

Lin Bloomfield retains the copyright on all of Norman Lindsay’s etchings and facsimile etchings, Editions are restricted to 550 and each is individually numbered. Authenticity is guaranteed by an embossed seal (see below) with a dot in the 6:00 o’clock position. All works have a Certificate of Authenticity and once an edition has sold out, the image is never again released.

All original plates used for the facsimile etchings are used in the printing process are cancelled, any other material is destroyed.

The facsimile etchings have retained and increased in both their popularity and value with many now in some cases commanding several thousand Australian Dollars.

In 1895, Lindsay moved to Melbourne to work on a local magazine with his older brother Lionel. In 1901, he and Lionel joined the staff of the Sydney Bulletin, a weekly newspaper, magazine and review. There they drew caricatures, cartoons and illustrations on demand – often in a style nearly indistinguishable from each other. Lionel on the right, and Norman is on our home page. Norman’s association with and contributions to the magazine would last over fifty years.

His vigorous illustrations include watercolours, lithographs, and etchings

Norman Lindsay’s love of art began with pencil drawings. In his youth the scarcity of paper would see he and his brothers would search their home town for anything to draw on. He grew up keening studying the works of other artists, and was inspired by the works of Albrecht Durer and Urs Graf.

Lindsay would often prepare for his larger paintings and etchings by initially composing his works with a pencil drawing. Because of his skill and very often the elaborate and detailed nature of his studies many have become works of art and collectable in their own right. Many of these pencil drawings where unsigned,

Etching House and other skilled Norman Lindsay specialists are often asked to validate the original pencil drawings as well as many other works made by Norman.

Many of Lindsay’s drawings were completed during his employment with The Bulletin. While it provided him with an income his creativity was stifled by the strict editorial guidelines of the publication. Regardless of the fact that these works were cartoons his attention to the message and tonal detail was painstaking. He would complete his cartoons at his home in Springwood from editorial instructions. In his early years he corresponded with the newspaper by post and later by telephone. As the Bulletin began to fail on the back of it’s historically strong and unpopular political views Lindsay’s association was terminated by the then editor in 1958.