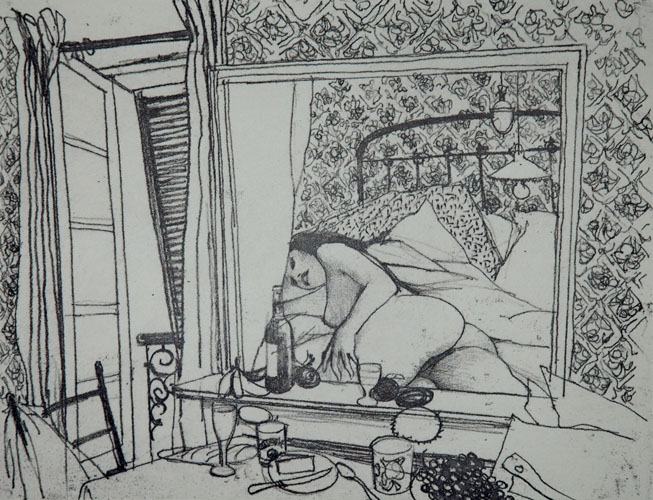 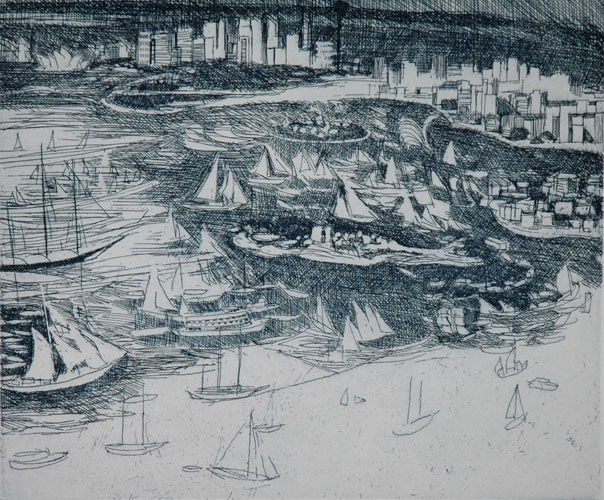 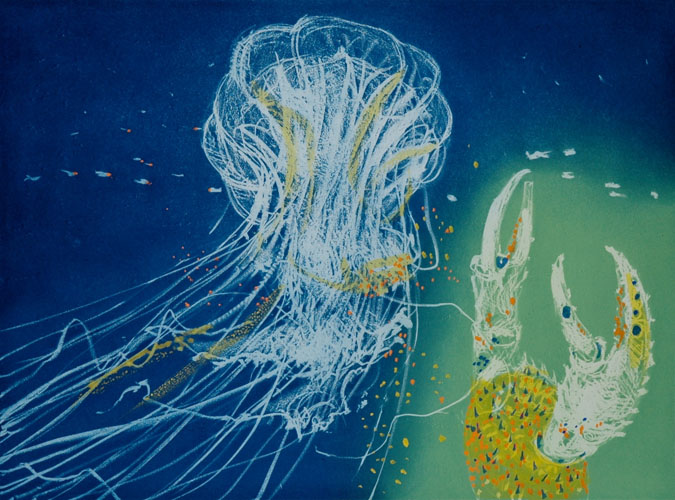 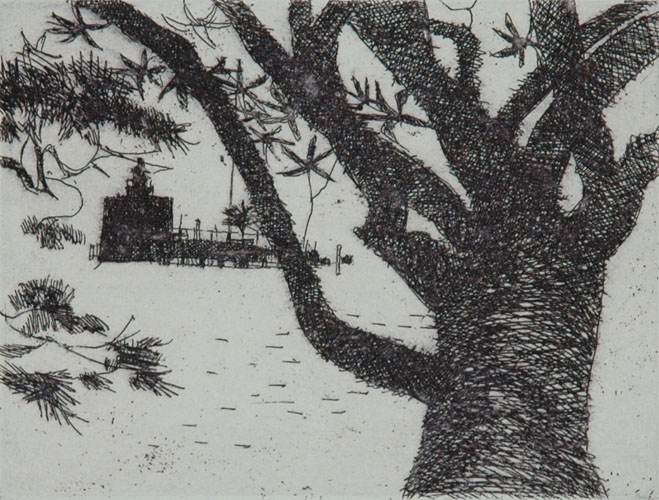 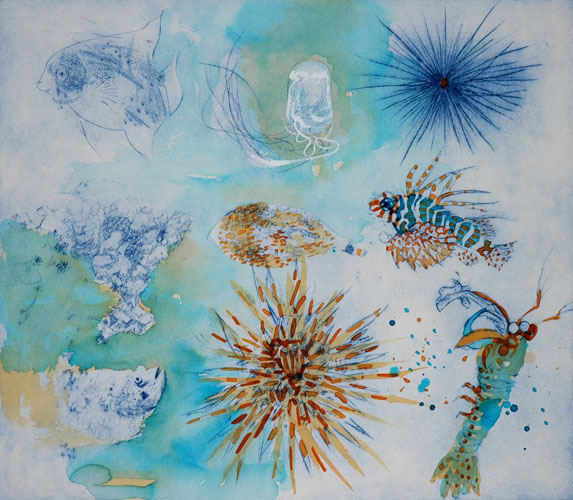 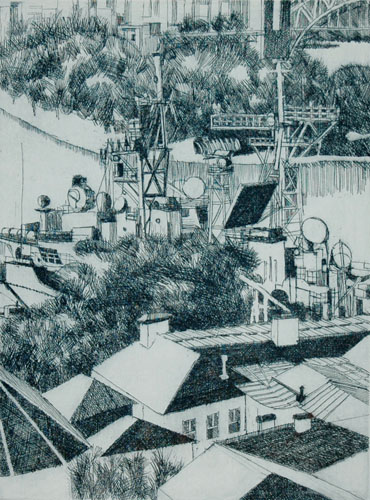 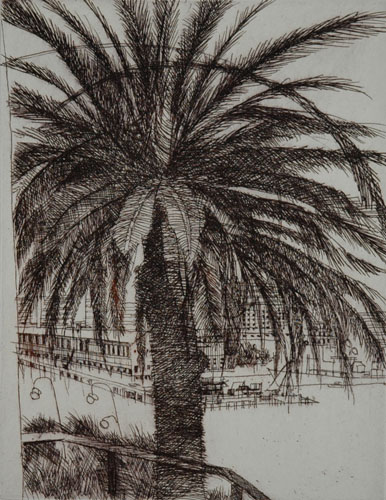 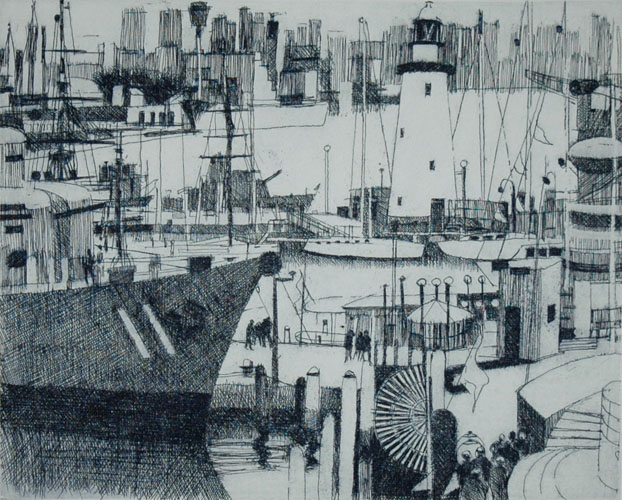 Frank Hodgkinson, the younger brother of Roy, was born on 23 April 1919. He studied at the Royal Art Society of New South Wales (under Dattilo Rubbo) while supporting himself by producing illustrations for magazines. After service as an official World War II artist, Frank Hodgkinson left Australia in 1947 to study and travel throughout Europe. During this period he took some lessons at S.W. Hayter’s Atelier 17 in Paris.

He returned to Sydney in 1953. Then, after winning the inaugural Helena Rubinstein Scholarship in 1958, he took up residence in Spain; John Olsen was living nearby. On a number of occasions in the 1960s Hodgkinson returned to Australia for exhibitions.

During a trip to Perth in 1969 he was invited to travel through the north-west of the state. The journey reawakened his need for the Australian landscape and resulted in his relocation to Queensland at the end of 1970.

In 1971 Hodgkinson welcomed Clifton Pugh’s invitation to visit him at ‘Dunmoochin’. He joined Pugh and John Olsen at this artists’ colony on the outskirts of Melbourne at Cottles Bridge. Pugh, who had recently returned from S.W. Hayter’s school, was keen to experiment with the oil viscosity etching process, and his enthusiasm proved to be a major stimulus for Hodgkinson’s printmaking.

Within a short period he produced two suites of prints, Inside the Landscape and Landscape Inside, and, jointly with Pugh, a book of prints and the poems of Harry Roschenko, titled IS.

In his figurative landscapes, time-worn lines become rich and sensuous — full of colour and texture in a joyous celebration of female and landscape forms. At the end of 1971 Hodgkinson left the artists’ colony to visit the Australian outback which has continued to fascinate him and stimulate his work.

Hodgkinson published a number of diaries with illustrations, some in limited editions (as in Sepik Diary, [compiled from a diary on patrol along the Sepik River by dug-out canoe whilst artist-in-residence at the University of Papua New Guinea in 1977] Richard Griffin, 1982) and some in more general form (Reed Books 1985) and Kakoda and Armhem Landers, Weldon 1987. A monograph of his life and work by the Senior Curator of Australian Art at the Art Gallery of New South Wales, Barry Pearce, was published in 1995 and a film about his working routine, the variety of media used, his collecting passions, his curiosity about the culture and aesthetic of both sophisticated and primitive societies was made in 1997.

Frank Hodgkinson died at his home on the outskirts of Sydney on 20 October 2001.

In an obituary in the Sydney Morning Herald on 23 October, Hodgkinson’s wife Kate spoke of a man who loved life and living. “In the early evening we realised he was sinking so we made some spaghetti and got a bottle of Grange and we sat around and drank it for and with him. [We] brought an Egyptian sarcophagus into the bedroom … because the Egyptians know their way through the netherworld and played his favourite music Miles Davis’ Sketches ofSpain. I had my hand on his heart and I realised it was no longer thumping. He had this huge heart like Phar Lap. He just drifted away. It was most peaceful”.