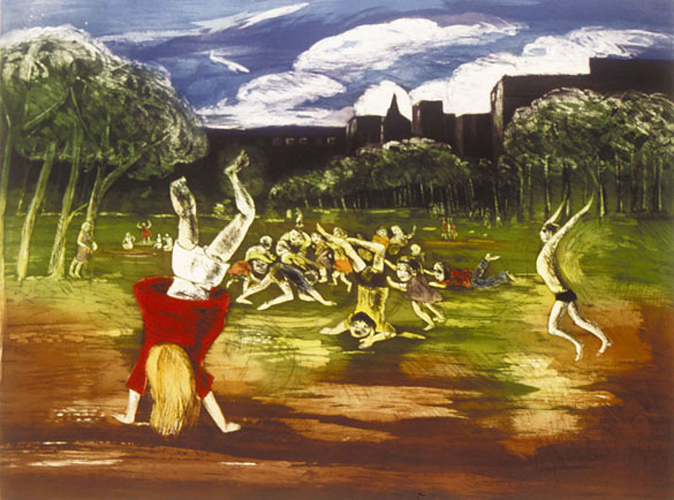 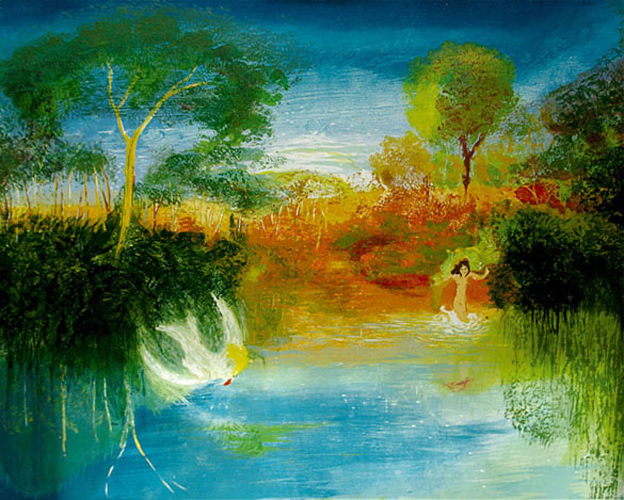 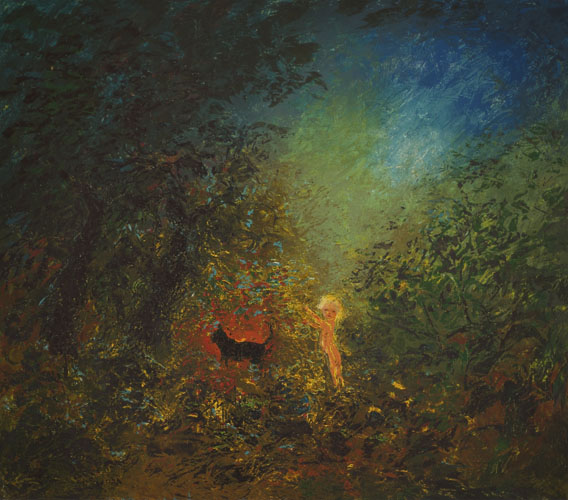 Cressida and the Cat 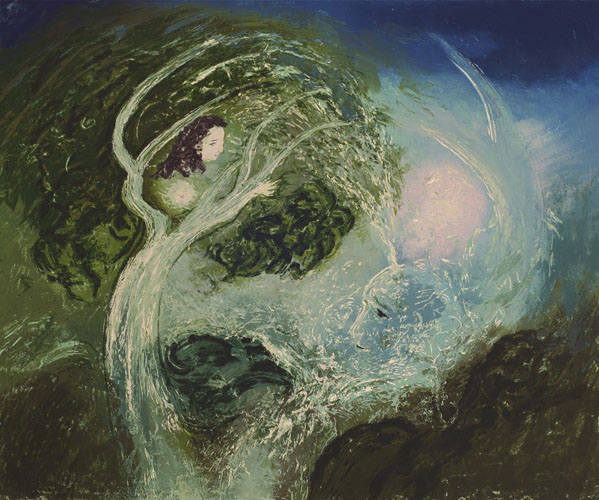 Doris and Merrick the Whale 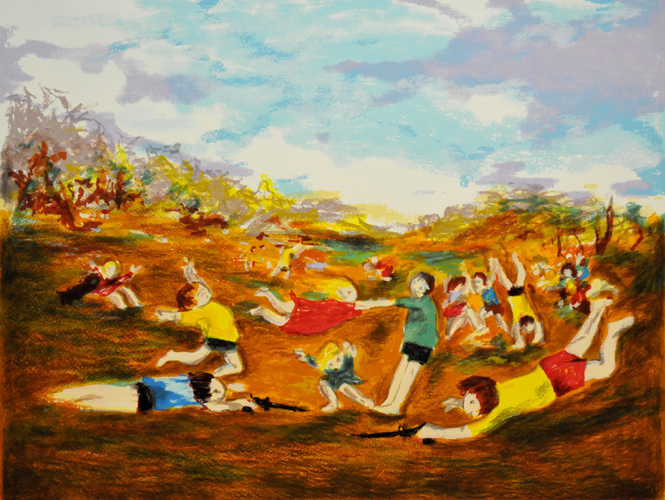 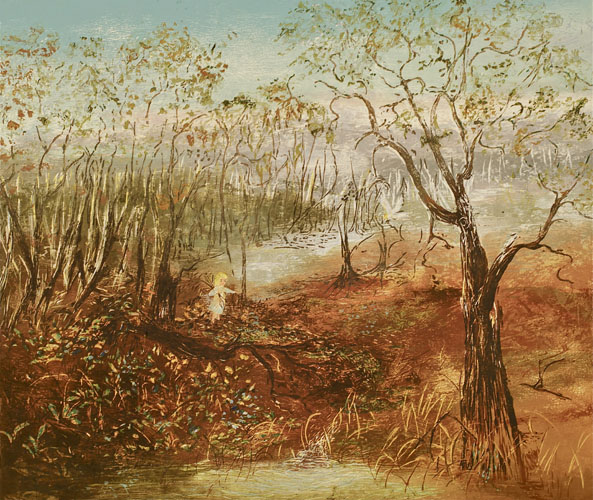 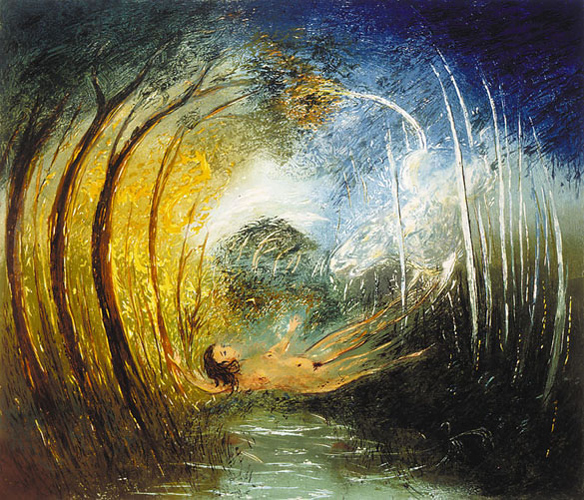 Beauty and the White Horse 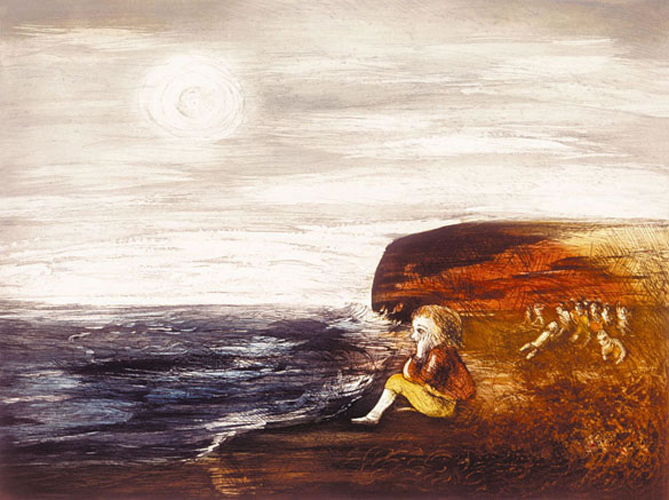 Dreamer on the Cliff 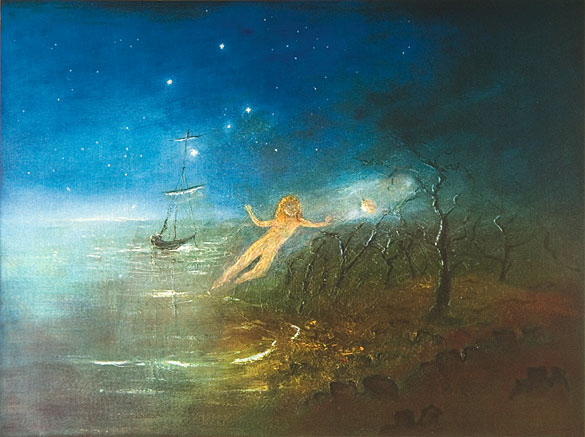 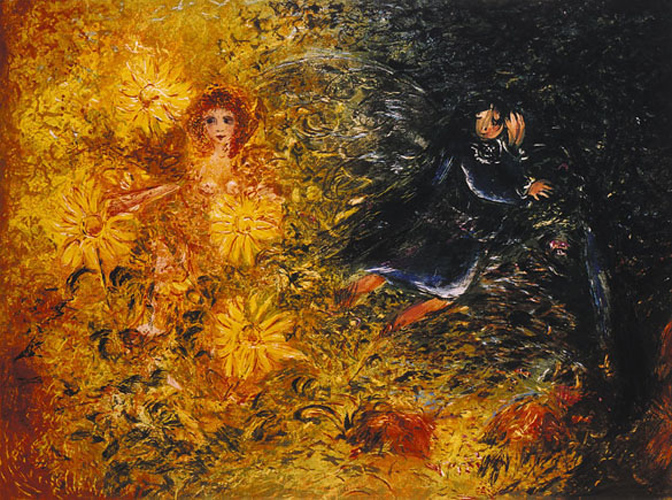 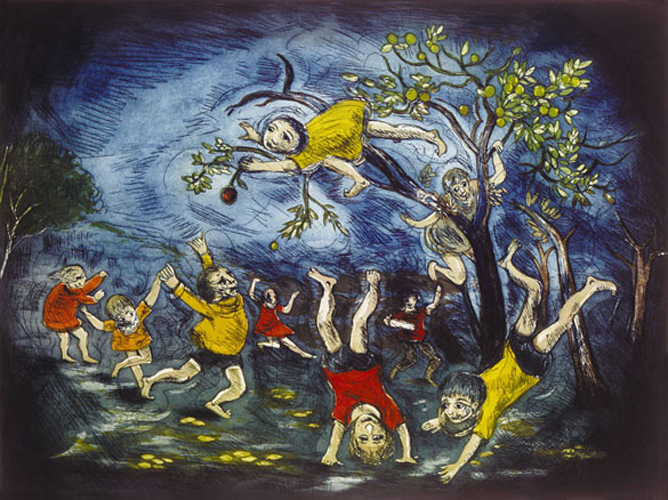 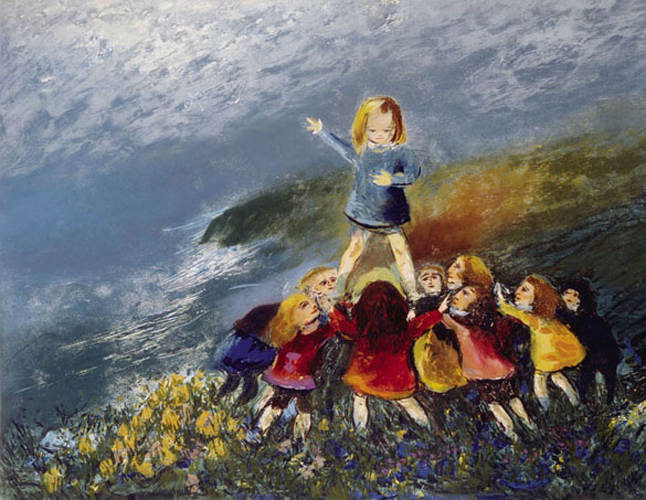 King of the Castle 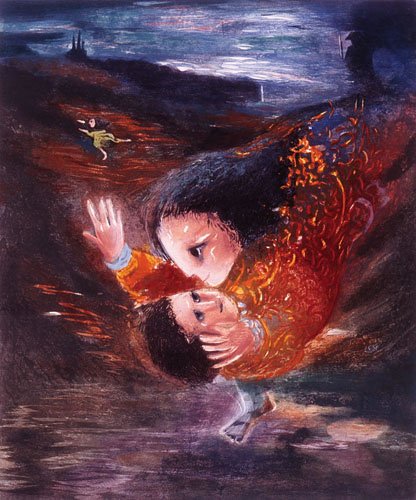 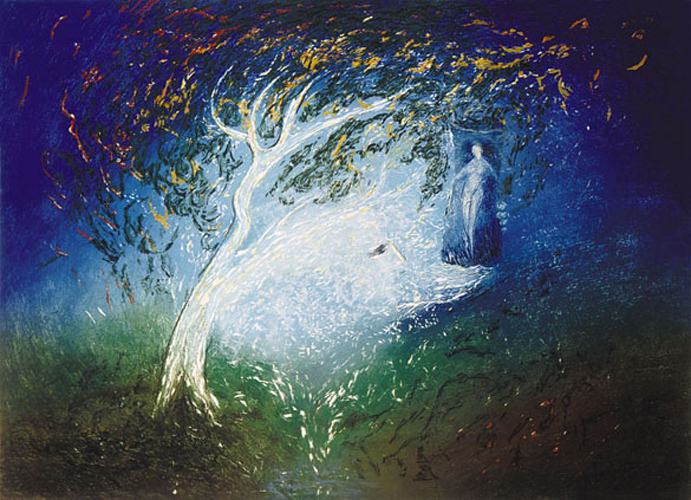 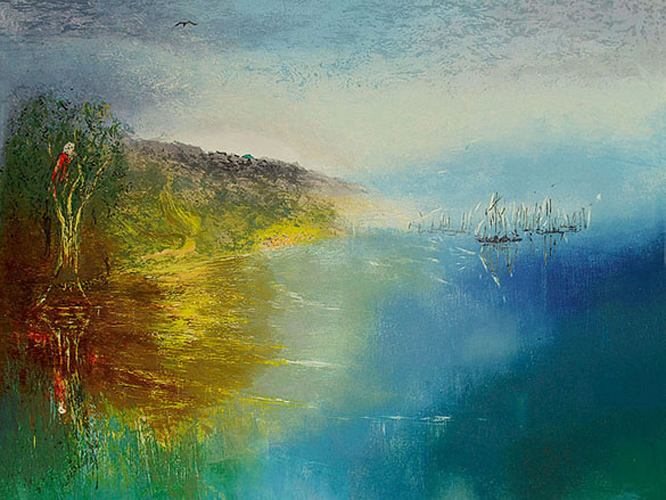 Return of the Tall Ships 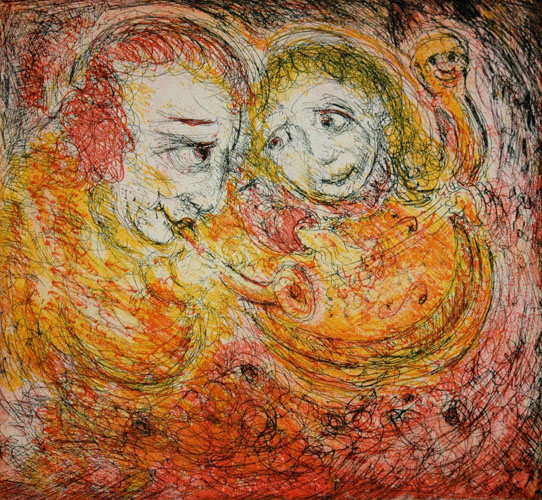 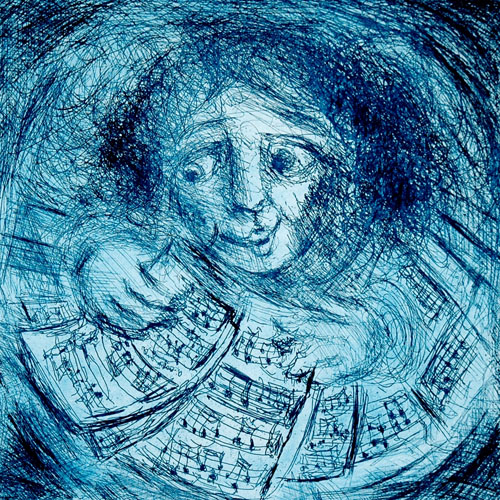 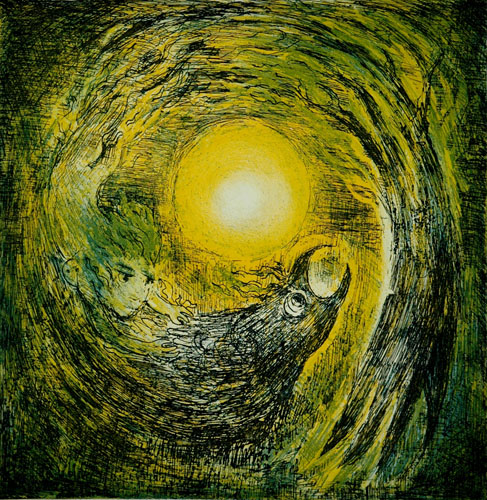 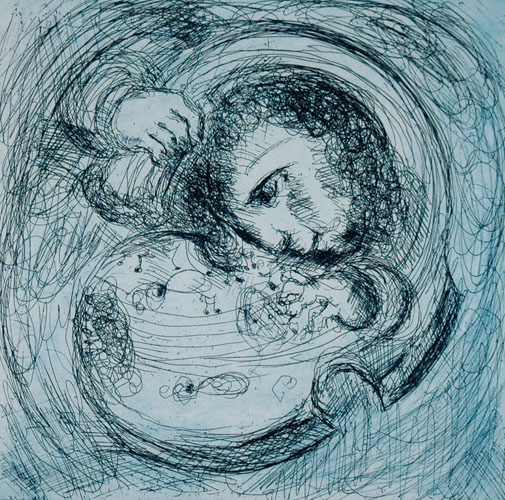 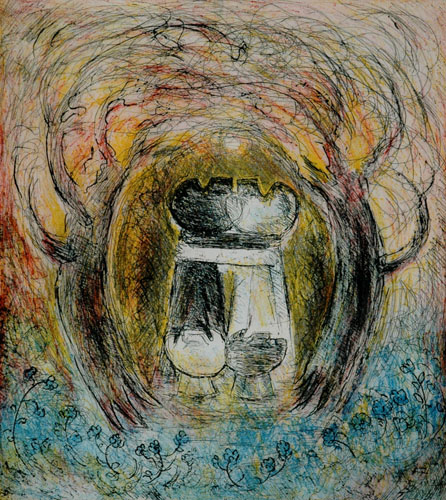 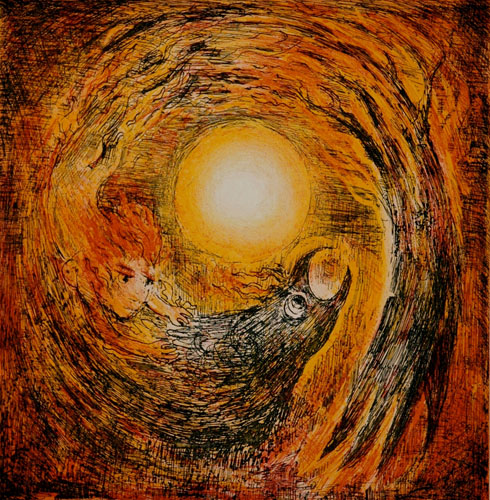 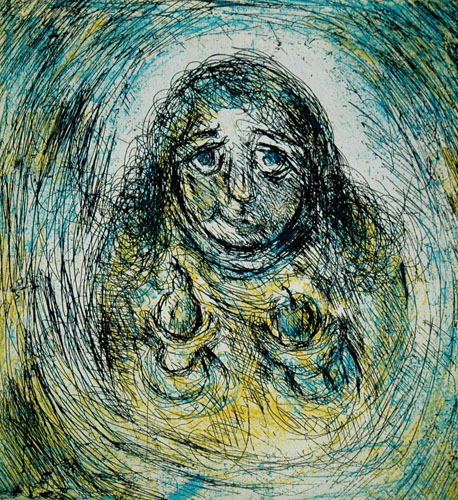 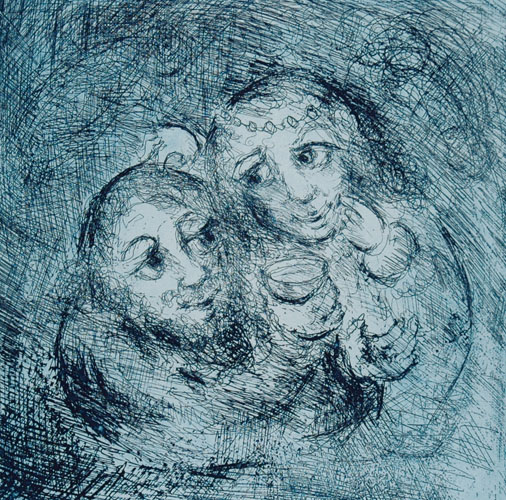 The Elixir of Love 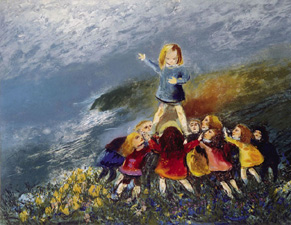 King of the Castle

NEWS -David Boyd 1924 to 2011, sadly this week November 2011 the passing of David Boyd was announced. A very much loved Australian Iconic artist will always remain with us through his beautiful art works that spanned many years in Oil paintings, etchings, and prints, David Brought a wonderful presence of love beauty and joy to the Australian art world, he will be sadly missed, Etching House

David Boyd was born in Melbourne in 1924; he is a figurative painter, ceramic sculptor and potter.

David Boyd’s art stems from a long family tradition of artistic talent. Acclaimed as a potter in the fifties and sixties, he began his career as a painter in 1957 with a series of symbolic paintings on Australian explorers. Since then, David Boyd has painted several major series of works, including his powerful Trial series, the Tasmanian Aborigines, the Wanderer and Exiles series and his Explorer series.

Following the success of his career with oil paintings David Boyd started to release successfully limited edition fine art etchings and prints to which Etching House collects for resale.

Picturing innocence and evil, destruction and creation, his works convey mythical and universal themes. Having won significant international recognition, David Boyd was invited by the Commonwealth Institute of Art, London, to hold a retrospective of paintings at their Art Gallery in 1969. The introduction to the catalogue written by Professor Bernard Smith the then Professor of Contemporary Art in the University of Sydney summed up the work and position of David Boyd in the Australian art scene when he wrote:-

“This exhibition represents a personal victory over fashion. For ten years David Boyd has painted against the current mainstream and for ten years Australian critics subjected his art to severe criticism. But during the last twelve months or so the hostility has weakened; revised opinions are beginning to appear. What was really at issue was not so much the quality of the paintings as the validity of his position.. Moral values, the human condition, might well have inspired so it was argued, great art in the past. But painting had now exhausted these positions. They were no longer available for the artist of the nineteen sixties. The criticism has not mattered much. David Boyd has continued to paint in his own personal manner and to find an audience and a growing market for his art in Australia and Britain. He has found that there is still a place for a moral painter.” (The Art of David Boyd, Nancy Benko, Hyde Park Press 1973)

Boyd is a world class artist whose work always causes a definite emotional reaction from his public. Always true to his thoughts and feelings he remains a distinguished Australian artist.

Here is more detailed information of where some of David Boyd art collections are being held:

The Legend of “Europa and the Cockatoo” – By David Boyd

The Legend of Europa and the Cockatoo is dedicated to my brother, Arthur Boyd, in appreciation of his generosity to the Australian people and his affection for cockatoos.” – David Boyd, 1995 “Unlike the various Trial series of paintings which used the visual language to express ideas about a fundamental and disturbing feature of the human condition, The Legend of Europa and the Cockatoos are presented as an entertaining parable. The following background notes may be of interest to people curious about how the series evolved. Late in 1994 I was working on some pastels called Music and the Angels. Because of the wings and the expression on the faces of the angel musicians, the pastels evoked the spirit of the Baroque rather than the exhilarating frenzy of 20th century rock music. Suddenly in December, following the opening of the new second north south runway and the closure of the main east west at Sydney Airport, the roar of jet aircraft ascending north in increasing frequency above my studio or the whining scream as they approached to land, completely drown the music of the angels. Putting aside their instruments they gazed sadly upwards or out of the picture. I have kept the angel that first appeared thus. It is called “Angel Listening to the Roar of Jets over Sydney Australia”. The painting belongs to the artists collection, on occasion is included, on loan, to selected exhibitions. What has does the above got to do with a winged figure chasing cockatoos? An idea can have its genesis in unexpected ways. Since boyhood I had not given a great deal of thought to airplanes, but now with huge jet machines constantly roaring overhead it become impossible to ignore this wonder of modern technology. To draw or paint pictures of the things would keep their menacing shape in the forefront of the mind; it happened that waiting amongst a stack of pencil drawings from the 1960’s was a sketch of a winged figure running through the bush land. The title, “Europa Fleeing from a Bushfire”, instantly kindled an idea. Why not! I thought. There is a link there, remote from jumbo jets but enough to set the imagination on fire. Using the drawings as reference I painted a winged figure running to gain speed, as a pelican does before rising. There followed other pictures of a related configuration – such as Europa falling above an inland sea or leaning against the rough back of a wombat while star gazing. At night she dreams that she is frolicking with the cockatoos. Sometimes her dreams are hounded by a sacred golden-plumed wombat sitting on her belly or the rarely seen black cockatoo. Her days are fully occupied chasing sulphur crested white cockatoos. Europa has fashioned herself a pair of solid gold wings but the weight of them prevents her from flying. She pursues the cockatoos because she believes their crests are made of the purest gold. She is convinced that if she captures the birds and enlarges her wings with their crests she will achieve the exhilarating freedom of flight. Europa is not successful until, from a hiding place in a wattle tree, she preys on the unsuspecting birds, grasping their crests when they fly close. Over a period of the hundred and seven years she gradually enlarges her wings. Alas, with each new crest she adds to the wings the heaver they become. The day arrives when she can no longer run or even move for she is crushed beneath the weight of her now mighty gold wings.

David was the Third and youngest son of artists Merric and Doris Boyd.

David Boyd Entered the Melba Memorial Conservatorium of Music at 17.

1942        Joined the Contemporary Art Society of Australia. Conscripted into Australian

with John Yule at the Rowden White Library, University of Melbourne.

(Jonah) and Erica Lloyd-Jones he began pottery career with Hermia.

First exhibition of pottery in Sydney

for a time by ceramist and painter Stanislaw Halpern. Travelled widely

throughout Spain and  returned to Australia

1957-58   Commenced painting ‘The Explorer’ series, exhibited at the Australian

Perceval, Pugh and B. Smith defending the figurative image in

contemporary painting in a joint exhibition in Melbourne. Exhibited

‘The Explorers and The Tasmanians’ in Adelaide

The Trial series’, He was elected President of the Contemporary Art Society

(Victorian branch), Councillor of the Museum of Modern Art of Australia

Council of the Contemporary Art Society of Australia

the technique Sfumato, a word used by Leonardo da Vinci to describe

that Leonardo used a candle flame to achieve this effect)

1967-69   Exhibited Sfumato paintings in London and in Australia, including

and ‘Limbo’ paintings in Adelaide, South Australia. ‘War Games’ in

South Wales. Commenced a series of paintings, ‘The Wanderer’, inspired

by the life of Benjamin Boyd, an Australian adventurer of the 1840s.

Retrospective exhibition of loaned works from various collections in

1971        Exhibited ‘The Wanderer’ series in separate sections in three concurrent

London exhibition’s started a series based on mythological ‘Orchard of

entitled ‘The Garden in the Wilderness’ in Newcastle, New South Wales.

1973        Commenced the ‘Exiles’ series which formed the latest inclusion in the exhibition.

David returned to France. Developed the theme, ‘The Exiles’

1975        Returned to Australia. Retrospective exhibition at

Canberra. Painted a series of works entitled ‘The Day of the Picnic’

1960        Elected Councillor of the Museum of Modern Art of Australia

Council of the Contemporary Art Society of Australia.

Vader, John, the Pottery and Ceramics of David and Hermia Boyd, Mathews/Hutchinson, Sydney, 1977

From Vision to Sesquicentenary, The University of Sydney, 1999

The University of Adelaide, South Australia

David Boyd Colloblock at Etching House – this technique is a unique process, it starts with the selection of an original oil painting by David Boyd, this painting becomes the image and colour reference piece for the print to be made, as many as 6 to 7 separate handmade and very detailed wooden plates are created, the use of 60 or 70 different colours or combination of colours may be used, sometimes the artist David Boyd may deliberately change a colour during the process of making the edition as opposed to adhering to the original painting reference colours, in this case it’s because he feels it suits the Colloblock process and image better and therefore also making each print in the edition a work of art in its own right, one could assume.

Each hand carved plate starts by being hand drawn, then hand carved, there after each plate is coloured up with as many as 10 or 15 separate colours, they are strategically and most importantly hand painted in a sequence on the block, then this block is pressed on to rag archive paper, this process is repeated up to 6 or 7 times then up to 60 times to make the edition, the end result is it is a unique handmade print, when you think about it the process not dissimilar to how an artist may build a painting in the traditional way, this Colloblock is derived by the use of a complex process and in complete collaboration between the artist and specialist printer, these fine art works are a very labour intensive process. Again each one is subtle and uniquely different. Tim Storrier paints a one of work specifically for each Colloblock. David Boyd Colloblock prints at Etching House are titled Cressida and the Cat, Doris and Merrick the Whale and Jessamine, these David Boyd fine art limited edition Australian Prints are from 2006, 2007 and 2009.