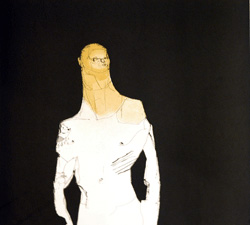 Through an exploration of the figure, tattooing, graffiti and the urban scape, Lister reflects on the world around him and how it changes him.

Lister completed a Bachelor of Fine Arts at Queensland College of the Arts, Brisbane.

Anthony Lister Born 1980 was mentored by Max Gimblett in New York in 2002 and was the recipient of the 2004 Queensland Education Minister’s Art Award, with a further mentoring workshop residency at Blender Studio, Melbourne.

With an impressive international line-up of group shows in London, Seattle and Loss Angeles over the past three years, Anthony Lister has also been involved in a project to paint on a derelict building in Manhattan, which was featured on the cover of the New York Times Art Section.

His audience is captivated by provocative fragments of subjects left unconcealed, and wonders at the significance of the final image. His works are a series of screens that mask the evolutionary genesis of the finished picture. Each canvas has its place in the timeline of Lister’s life, revealing his passing interests, social consciousness, and intents.

Revealing messages about our social environment and curiosity about where these new maps may take us, Lister is a young artist with his eye definitely towards the future. Anthony Lister at Etching House, Bold Lassand Bold Guy available now.

Anthony Lister is included in Australian Art Collector’s 50 Most Collectable Artists list in 2011.