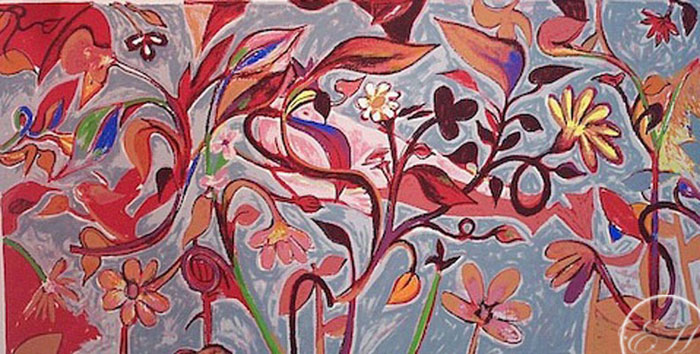 The Charles Blackman art work titled Ikebana is from the famous Garden Suite of 2004, we do Lay Buys and Deliver Free. On Charles Blackman’s return to Australia he settled in Sydney. Apart from his exhibitions, Charles Blackman has been active in many other areas: he produced a series of genre paintings and paintings from the nude (1972) from which Sony Corporation presented Girl Listening to Music to the Drama Theatre of the Sydney Opera House; Charles Blackman lived for a while at the Cite Internationale des Arts in Paris where he produced a volume of drawings of that city; He has won many prizes and distinctions, culminating in a major retrospective in 1993. The National Gallery of Victoria curated this first major retrospective of Blackman’s work, ‘Schoolgirls and Angels’ which toured to Brisbane, Sydney and Perth. Blackman’s work will again be celebrated from 11 August 2006 at the National Gallery of Victoria with an exhibition of his series based on Lewis Carroll’s Alice in Wonderland. Charles Blackman received an OBE for services to Australian art in 1997. The highest price paid at auction for a Charles Blackman was $430,500 in 2001, for The Mad Hatter’s Tea Party, Tempera, and Enamel & Oil on Composition Board. Collections National Gallery of Australia and all state galleries numerous regional galleries and university collections He is represented in the Musee D’Art in Paris, the Contemporary Art Society of London