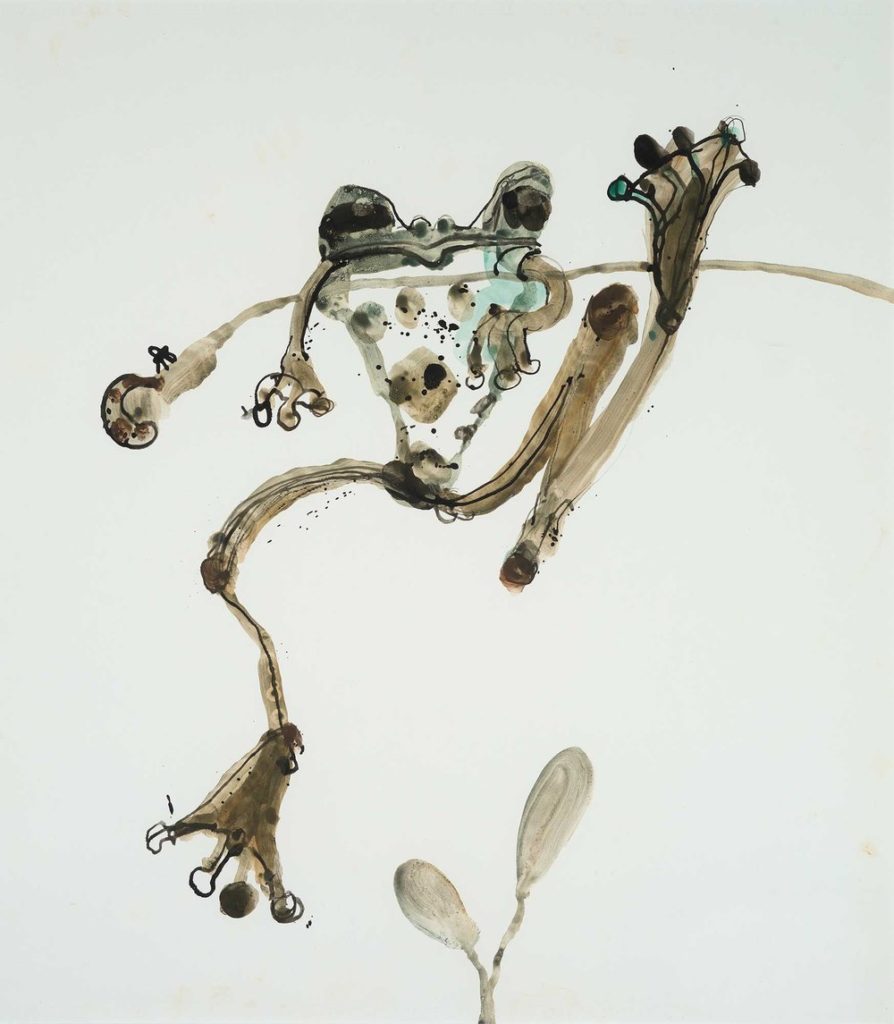 John Olsen is one of Australia’s most significant and accomplished artists and is recognized for this both nationally and internationally for his energetic and distinctive art.

Olsen’s name is widely associated with his exuberant and colloquial You Beaut Country series which firmly established his reputation in the early 1960s. He is also famous for his interpretation of Sydney harbor in his commission for the Sydney Opera House called The Salute to Five Bells undertaken in the 1970s.

Plants, birds and animals began to feature in his works during the 1970s and 80s when he travelled extensively across the country, giving new insights into Australia’s regional and desert landscapes though he has always sought to capture a spiritual and universal dimension to the landscape and the natural world in his work.

Barry Pearce, head curator of Australian art at the Art Gallery of NSW, describes Olsen as “the king, the one who has defined the continent of his generation better than anyone else”.

There have been other great Australian landscape painters during Olsen’s time, says Pearce, “like Fred Williams and now William Robinson”. But Olsen is “the poet of the brush. He’s been brave enough to go out into the interior of Australia and embrace it with love, absorb himself in it like a true poet.” In an Olsen you can recognize “the topography” despite “the felicity of his brush”. What’s more, says Pearce, “He’s been getting better. His last few shows have proved he’s a real genius.”

Olsen has won many awards including the Archibald Prize in 2004 for his self-portrait, the Wynne Prize in 1969 and 1985; he also received an Order of Australia (A.O.) in 2001. In 1977 he was awarded the O.B.E. for services to the Arts and in 1993 he was awarded an Australian Creative Fellowship.

John Olsen’s work is represented in all Australian state gallery collections, the National Gallery of Australia and regional galleries Australia-wide. He is also represented in institutional, corporate and private collections in Australia, Asia, the United Kingdom, Europe and the United States of America. He is probably best known for his huge Salute to five bells, a 70 x 10 foot mural in the northern foyer of the Sydney Opera House.

THE EXTENT OF JOHN OLSON’S talent was recognized when he exhibited in the ‘Direction 1’ exhibition held in 1956 at Macquarie Galleries, Sydney. Immediately following this influential exhibition he left the shores of Australia and embarked on a three-year privately sponsored journey to Europe. He sailed on the Orion in December 1956. After six weeks travelling via Cape Town and the Canary Islands, he arrived in London in January 1957.

Olsen remembers, ‘It was a bleak winter’s day and the atmosphere was rather depressing’. Several months later, after a brief visit to Cornwall, he travelled to Paris and was re-acquainted with an old art school friend, Earle Backen.

Backen was studying with the English-born printmaker S.W. Hayter in Montparnasse. Olsen, impressed by Hayter’s philosophy and methods, immediately signed up and began working in one of die most advanced print workshops in the world – Stanley Hayter’s Atelier 17′.

Olsen was twenty-eight years old. He had already studied at the best art schools Sydney had to offer: firstly with Desiderius Orban for ten weeks at Circular Quay and then, from 1950 to 1953, at Julian Ashton’s at The Rocks. Interestingly, both these schools were right on Sydney Harbor, a theme that was to stay with Olsen all his life. It was at the Julian Ashton Art School that Olsen began to develop his life-long dedication to drawing. His teacher, John Passmore, was relentless in his demands for graphic veracity. All had to be examined – anatomy, bones and die muscular – and understood in the terms of function. Graphic marks are the essence of Olsen’s work, be they in prints or in large paintings such as Spanish Encounter in die Art Gallery of New South Wales or his Five Bells in die Sydney Opera House.
Orban had worked in Paris at the time Cubism was breaking through. He claimed to have known Picasso and became quite famous as a teacher of a colorful blend of Post-Impressionist and Cubist styles. He advocated the idea that creativity was achieved through a balance of the perceived and die spiritual worlds; ideas that would later fuel Olsen’s interest in Zen Buddhism. But it was really John Passmore, whom Olsen met at Ashton’s, who made a lasting impression, ‘I am eternally grateful for his encouragement in my student years’, says Olsen, ‘Passmore had great insights into the subtleties of drawing’.
Olsen was doing it tough at the time. He was up at four in the morning cleaning offices before starting classes at eight thirty. The curriculum at Ashton’s centered on life drawing on Monday and Friday, life-painting on Wednesday, and evening classes three times a week. On his days off Olsen could be found in the life-drawing classes of Godfrey Miller at the East Sydney Technical College.

Orban, Miller, and Passmore these were magic names for anyone aspiring to become an artist in the 1950s and early 1960s in Sydney. Orban had die style of a Hungarian patrician (appropriately so);

Miller had a private income. He lived as a recluse in Paddington, and was one of the most eccentric artists ever to lift a pencil in Sydney.

In the studio Olsen was working it out. His first major series, die key works of die fifties, were his ‘Bicycle Boys’. Here he took the Orban/ Miller/Passmore inheritance right to the edge. It was art abstracted from realism (dial is, if you take ‘realism’ to mean aspects of die perceived world) to which Olsen added a map, or chart of the spiritual responses to such physical stimuli. Olsen’s line had started as a walk that was soon to become a run, and by 1960 – in his triumphal painting of his memories of Spain entitled Spanish Encounter – it became a ball-tearing, testosterone-packed gallop.

Olsen’s bicycles, however, had their familiarity of paired figures. These were initially influenced by the horse and rider drawings and sculptures of the Italian master, Marino Marini, and the film, The Bicycle Thief, by Vittorio de Sica. Yet Olsen’s bicycles still described at one moment in time, from a single viewpoint, a frozen instant or episode – not the whole journey described from numerous moments in time and different viewpoints. These images were still cycling through nineteenth century space as prescribed by Cezanne and Passmore. But, the race had begun. His bicycles provided both structure and story; line and mass; armature and flesh. Line is offered as a framework on which those rectilinear forms are rubbed and scrubbed.

What was actually happening was a de-figuring of painting, releasing it from the outline of the perceived world. Mark-making was still a profusion of short staccato strokes, like Cezanne who always seemed unsure of how many commas to use, or when to stop the painting. It was a dry, intellectual process of reiteration in the studio of the styles of Keith Vaughan in London (whom Passmore had known when they both worked at die Lintas advertising agency) and across the channel in the paintings of Vieira da Silva, Manessier, Bazaine and others of the School of Paris.

There were many other influences around at die time. Students at Ashton’s and East Sydney Technical School fingered the pages of Werner Haftmann’s monograph on Paul Klee. Everyone wanted to take a ‘line for a walk’, paint a magic square, and make the invisible visible as advocated by this Swiss whiz Paul Klee, Bauhaus master and author of the influential text, The Thinking Eye. Kandinsky’s On the Spiritual in Art was popular also. It was, as the Australian art critic Robert Hughes recalled decades later -in his book Nothing if not Critical (1990) – as if… there is no tyranny like the tyranny of the unseen masterpiece … .In Australia we had art schools teaching people how to paint Cézannes, but our museums had no Cézannes to show us’.
So, when Sydney businessman, Robert Shaw, offered the possibility of private sponsorship for Olsen to work in Europe, to study in the flesh dies paintings he had only seen in reproduction, there was no hesitation on his part.