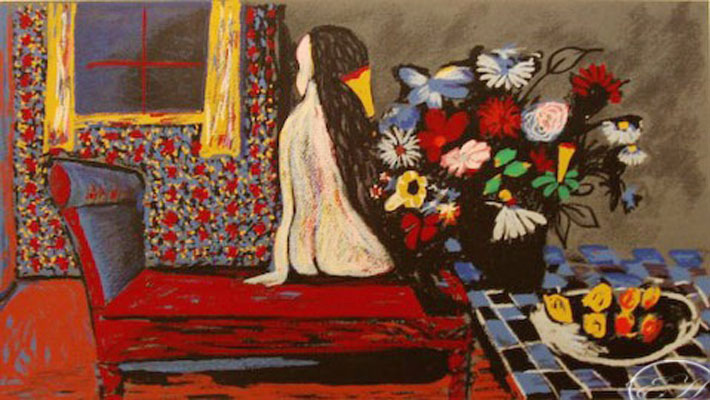 Charles Blackman – silk screen Girl Listening to Music, the Paper size 63x35cm, Image 56x76cm – Charles Blackman Girls, Women, Wives and Mistresses, have played a role in Blackman&#39;s life and the female in her various forms re-appears in his paintings time after time. He created haunting images of grave women and girls, detached from their surroundings, absorbed in daydreams or games and oblivious to reality. Barbara Patterson whom Blackman married in 1951 had impaired sight and her reliance on Blackman&#39;s eyesight sharpened his observation. His empathy with her predicament led him to focus on the face, depicting figures with huge, dark, expressive eyes. Of these most powerful invocations, the image of women is perhaps the strongest, such that he has painted woman in a fashion rarely ventured by other painters, writes Nadine Amadio in a book on Blackman. His paintings of women reach the emotions, the dreams and the inner world of women…