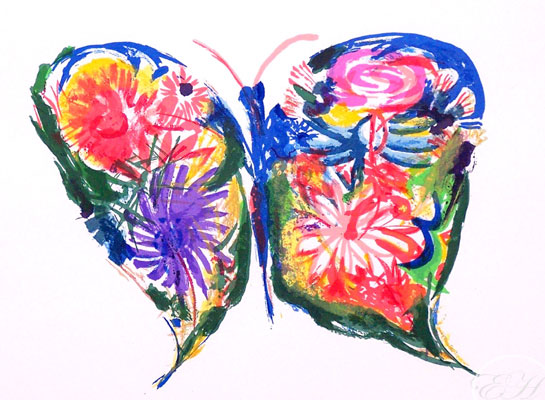 Flower Butterfly Silkscreen edition 90 Charles Blackman Flower Butterfly from Etching House is framed in a simple understated gold edge frame with large mount, it is and edition of 90 and sold out as far as Etching House is unable to obtain any more. Charles Blackman was born in Sydney on 12 August 1928. He left school at thirteen and worked with the Sydney Sun, while attending night classes in drawing and design at the East Sydney Technical College from 1942-5 under Hayward Veal. Charles Blackman – A successful Australian contemporary artist represented in most states and provincial galleries and Etching House has for years proudly collected and sold Charles Blackman limited edition etchings and works on paper.> Charles Blackman has in many ways been an influence to many young as well as some established artists. His work has been extremely popular and has a strong broad appeal, his symbolic style of including children, flowers, gardens, cats, dreams all reflect emotions and compassion. .

Etching House believes over the years Charles Blackman has an amazing 3613 recorded works sold since the 70s to and including 2004, in 2005 year to date July, his recorded sales is 112 works, these figures are excluding all gallery and exhibition sales nationally. The figures show a solid popularity and there has been an increase in demand for his work in 2005. Etching House believes Charles Blackman has brought much joy to Australians with his diverse range of subjects and mediums, some of the most popular being – Charles Blackman Alice series, School Girl series started in the 50s, Orpheus Suite – of which the 1998-2000 release of 12 Collagraph images, a limited edition of 70 sets has this month sold out completely with a current RRP of $66,000 a set.