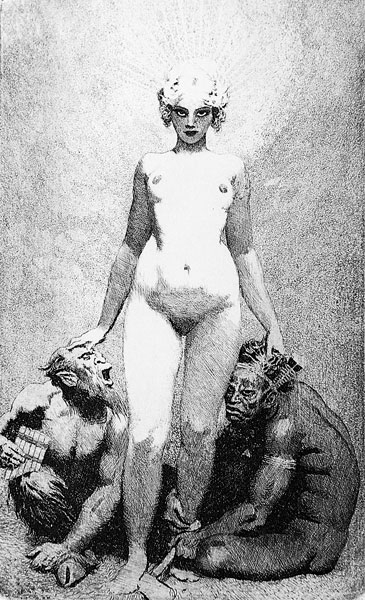 Facsimile etching by Norman Lindsay CREATIVE EFFORTSOLD SEPERATLY or as a set.

The original etching Creative Effort (1920, 15.2 x 9.3 cm) was published in 1920 in the book of the same name. The etching symbolises creative effort as a woman with a halo of light emerging triumphant over the forces of darkness.

Creative Effort and Our Earth is a new Norman Lindsay Facsimile Etching Folio set released in 2008, the folio contains, as well as the two Facsimile Etchings, a brochure with details of the two books – Creative Effort and Our Earth in which the original etchings of the same titles, Creative Effort and Our Earth, are included and also the essay ‘The Craft of Etching’ by Norman Lindsay.
Creative Effort had its genesis in World War I (1914-1918). From the beginning Norman had been affected by the war and depressed at the way it was changing the world. In 1916, Norman’s brother Reg was killed on the Somme. In a poignant letter to Olive Hetherington, written in May 1958, Norman recalled the impact of the war years: ‘At this date it is hard to convey the sense of horror that war inflicted on humanity … one walked the streets to see half the women in black, mothers, wives, sisters in mourning for their dead … in those times I paid frequent visits to Creswick and met many mothers mourning for their sons; some of whom were the girls I had known in my youth …‘
For several years Norman had been wrestling with the timeless question of good versus evil and although he was not a believer in any orthodox religion, the war crystallised his belief in the survival of the spirit after death. The cataclysmic effect of the war and the death of Reg brought Norman to the belief that artistic reality freed the artist from earth into a spiritual world; it then heightened the belief for the need for people to have some assurance that there was some form of life after death drove many grieving relatives to seek solace in spiritualism. Ouija boards, which enabled groups of people to try and communicate with the dead, became a popular pastime and under the circumstances it was hardly surprising that Norman thought that he could speak with Reg via the board.
It was this assay into the occult that gave Norman the final impetus he needed to write Creative Effort. He felt that a universal state of moral degeneration had led to the war and tried to put his own values into some sort of order. Years later, long after he had repudiated its message, he tried to explain how he had felt: ‘ As for Creative Effort – well, I suppose you’ll have to read the thing as it embodies an outlook on life and art that engrossed me at the time of writing, based on the ferment of ideas with which I was infected after the 1914 war.‘
Although many of the principles found in Creative Effort are sound, others original and arresting, it is impossible to overlook the fact thatCreative Effort is a confusing collection of Norman’s thoughts on life, death, good, evil, truth, sex, knowledge and other associated ideas. In essence, Norman affirmed that the arts are of paramount importance. He maintained that it is in creative art, and creative art alone, that the direction of life can be found.”