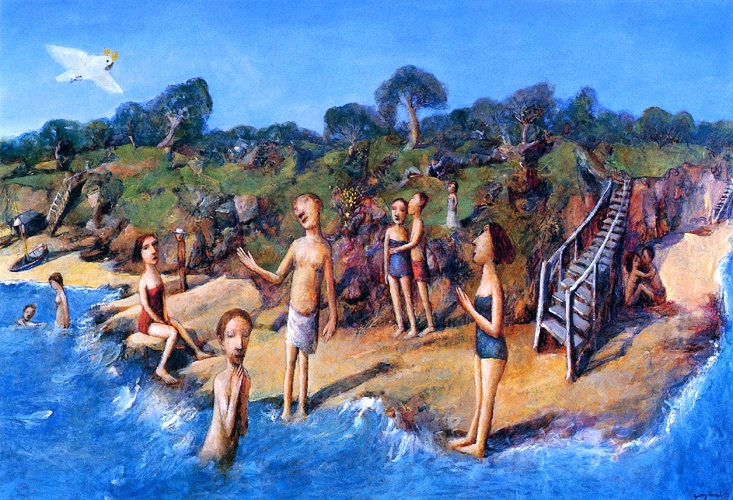 One of the very beautiful pieces from Garry Sheads religious series of works was Baptism of Christ at Bundeena 1999. It is a Oil on Canvas, size is 168x246cm, it is a spectacular works and currently in a private collection.

In a number of his large religious paintings, such as Baptism of Christ at Bundeena, 1999, Shead takes the concept a little further and relocates some of the central events in Christ’s life into the recognizable neighbourhood of Bundeena. A parallel may be drawn with Stanley Spencer’s Cookham, which became for him the microcosm of the New Jerusalem, where both the sacred past and the apocalyptic future were realized and where Spencer’s erotic Muse came to inspire the artist. It was also in Cookham that Spencer declared: ‘Desire is the essence of all that is holy.’ In Shead’s Baptism, we recognize the shoreline of Bundeena where, under the protective flight path of the sulphur-crested cockatoo, the Antipodean dove of the Holy Spirit, a most carefree and relaxed John the Baptist indicates to the heavens that a D. H. Lawrence-like Christ is ready to be baptized, while Frieda walks off somewhere in the background.

There is a couple going skinny-dipping, possibly preparing them selves to be baptized, while in the shadows of the wooden stairs leading down to the beach another couple casually make love.