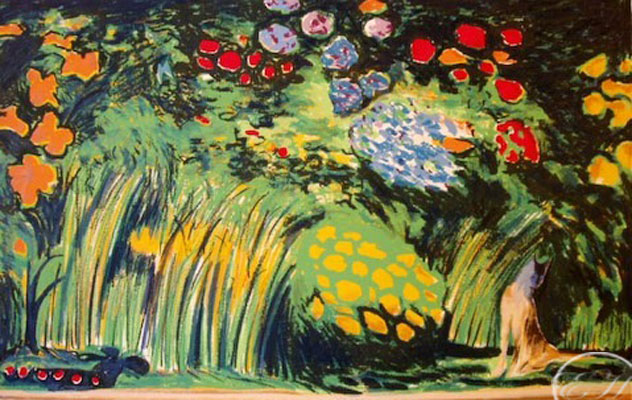 This Charles Blackman limited edition fine art Etching/Lithographic print art work titled “White Cats Garden” is from the Garden Suite 2004 and has been sold out for a while; it is a very popular image. Etching House has one only Artist Proof titled White Cats Garden. Charles Blackman was born in Sydney on 12 August 1928. He left school at thirteen and worked as an illustrator with the Sydney Sun newspaper while attending night classes at East Sydney Technical College (1943-46) under Hayward Veal. Etching House is proud to carry and sell his works for some time now, Charles has stopped painting for some time now. In 1946-8 he met Lois Hunter, a poet from New Zealand and a member of the Wellington avant-garde, who introduced him to the work of many writers and artists, including Arthur Rimbaud and T.S.Eliot. He also met Barbara Patterson, another poet, who became his wife in 1951. Blackman moved to Melbourne in 1950 where he married Barbara, worked as a cook and practiced his art when he could. His situation changed when he received the patronage of John Reed- leading to several exhibitions. This was the time he painted his series Schoolgirls & Alice in Wonderland. In 1959 he was a signatory to the Antipodean Manifesto, a statement protesting the dominance of abstract expressionism. The Antipodeans were a group of 7 Australian figurative artists which included Charles Blackman, Arthur Boyd, David Boyd, John Brack, Robert Dickerson, John Perceval and Clifton Pugh. Art historian Bernard Smith was an eighth member All except Dickerson were Melbourne-based. Collections National Gallery of Australia, and all state galleries Numerous regional galleries and university collections He is represented in the Musee D’Art in Paris, the Contemporary Art Society of London Selected References 1993 Charles Blackman: Schoolgirls and Angels, catalogue for retrospective at NGV 1989 Shapcott, T., The Art of Charles Blackman, Andre Deutch, London 1983 Amadio,N., Orpheus the Song of Forever, Craftsman Press, Sydney 1982 Amadio, N., Charles Blackman’s Paris Dreaming, A.H. & A.W. Reed, Sydney 1980 Amadio, N., Charles Blackman: The Lost Domain, A.H. & A.W. Reed. Sydney 1976 Australian Painters of the 1970s, Mervyn Horton, Ure Smith 1967 Shapcott, T., Focus on Charles Blackman, University of Queensland Press, Brisbane 1965 Mathew, R.,Charles Blackman – Monograph, Georgian House, Melbourne 1965 Alvarez, A The Paintings of Charles Blackman: The Substance of Dreams