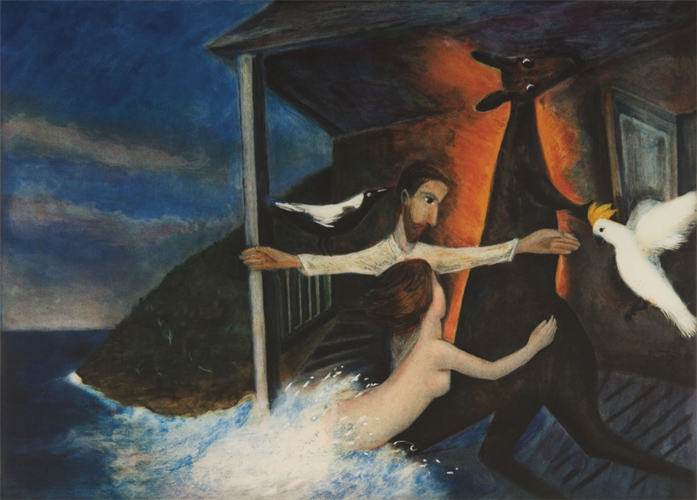 Garry Shead has just completed his new fine art etching print titled “The Sacrifice” available September 2009, the Etching image size is 65x100cm, Sheet size is 78x108cm, it was made using 4 plates with 9 colours and is a limited edition of 65 only, for those clients making a purchase will also have a certificate of authenticity and several pictures of the artist Garry Shead working on the etching plates, A.P or Numbered editions are all the same price, delivery is free in Australia.

Etching House has a payment or lay buy plan for up to 12 months no interest.

September 2009 – Garry Shead new release etching titled “The Sacrifice” is from the famous D.H. Lawrence series of 1993, in the same year Garry Shead won the famous Archibald Prize with a portrait of tom Thompson.

The Etching will be released for sale in September 2009.

Sacrifice was also done as an Oil painting; it is also featured in the book kangaroo by D.H. Lawrence.

Excerpt from Speech by Professor Sasha Grishin AM, FAHA

‘The Sacrifice’ Take for example the major canvas, The Sacrifice In the centre are two figures accompanied by the two birds – the magpie and the sulphur-crested cockatoo – and there is the kangaroo in flames in the background which seems to be a source of illumination.  All of this, taken together with the coastal cottage and the scrubby foreshore of the NSW coastline, may remind one of the DH Lawrence series, but such a reading would be somewhat erroneous.  On closer examination it would appear that the male figure, positioned strategically in the exact centre of the composition, appears as if crucified in space, his head slightly inclined to one side as in traditional medieval Crucifixion of Christ scenes.  I think that it was Arthur Boyd who originally introduced the swooping magpie in his Crucifixion imagery of the 1940s.  With Shead the magpie and the cockatoo adopt the role of the sun and the moon, the polarity which defines human existence and without which no traditional Crucifixion scene would be complete.  The most interesting and telling figure is that of the female nude, who like a mermaid belongs to the sea knowing that if she leaves the water she must perish, while if she returns to the sea she will sacrifice her love for ever.  What is very unusual in Shead’s oeuvre is that she has her faced turned away from the spectator and her identity is known only to the one who is crucified.  Her form and the colour of her hair suggest that this could beJudit, the artist’s wife who died on 8th May 2007, yet the work thrives in its sense of ambiguity.  When the identities are not firmly fixed, then there is room for allegory and symbolism and the freedom of association which delivers a deeply personal reading uniquely relevant to each beholder.  On closer examination it seems that the kangaroo is opening the window and offering a path of escape – but for these sacrificial lovers there is no, and never will be, a way out.

Garry Shead at now 67 is a master of Australian art in that he is a satirist, surrealist, magic realist and lyrical landscapist wrapped into one, a Oil painting titled Queen of Suburbia sold $432,000 in 2007, a another well priced smaller oil painting titled The Letter sold for $174,000 in late 2009,

Garry Shead is a blue chip iconic Australian living artist, his tireless and passionate inclusion of his life long muse and wife Judith and depiction of the Australian coast is breathtaking.

D.H. Lawrence series titled “The Kangaroo” was written on the coast in Thirroul.

Other Garry Shead series of paintings etchings and prints to date have been – Kangaroo, Bundeena, D.H. Lawrence, Muse, Monarchy, Ern Malley, Magus Study, Tango dance and Housebreaker series all successful for him over a period of time.

Other Australian Iconic artist and series that are in the same league are Charles Blackmans Alice’s and School Girl series, Olsen’s Frogs, Whiteley’s Lavender bay and Towards Sculpture editions, Nolan’s Ned Kelly series, Storrier with his Burning rope and burning log images are all just a few Australian Iconic comparisons.

Etching House specialise in Limited Edition Works on Paper by Australia’s iconic and awarded artists – Etching house for over a decade has educated thousands of people in the fine art of collecting Etchings and limited edition works on paper, Etching House has been the single largest promoter of Etchings and the education of what Etchings are today, a lost tradition that has been around since the 14th century.

Masters like Norman Lindsay, Lionel Lindsay are 2 iconic Australian Fine art Etching makers, Norman and Lionel Lindsay have one of the largest range of Etchings “works on paper” ever made in this country.

In later years the true masters have been followed by the likes of Garry Shead Archibald & Dobell Prize winner, Jeffrey Smart represented by major galleries and in major collections,

John Olsen represented by major galleries and in major collections,

David Boyd, represented by major galleries and in major collections,

Limited Edition Works on Paper are well known in today’s Fine Art World. They are more affordable than original artworks, hand finished and signed by the artist, collectable and have in some cases has shown a considerable increase in value.