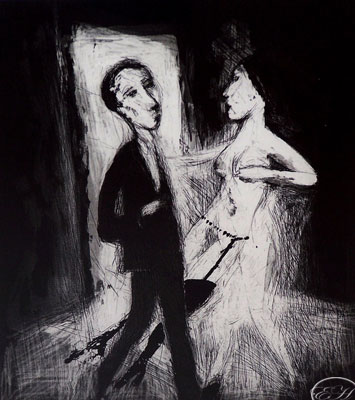 The Tango Dance etching series was very successful for Garry Shead and Etching House who had sold quite a lot of these limited edition etchings.

The Tango series to day is very hard to find, Garry Shead followed on with several other highly successful etching works one being the Ern Malley series and others like The Horseman series, Monarchy series, to name a few.

Garry Shead has released etchings relating to some of his famous oil paintings however each with a unique difference. Etching House has the largest single collection in Australia.

Etching House believes Garry Shead is one of the best artist and etchers to come out of Australia for a long time; Garry is with out doubt world class. Garry Shead has as you may see on the Etching House web site released a new Limited Edition book containing three of the most beautiful original etchings from the highly successful and brilliant Ern Malley Series, the book is titled The Apotheosis of Ern Malley and all at only $3300 Book Inclusive, yes inclusive, this book has many images of his work and is a wonderful place to just hide away and enjoy yourself.