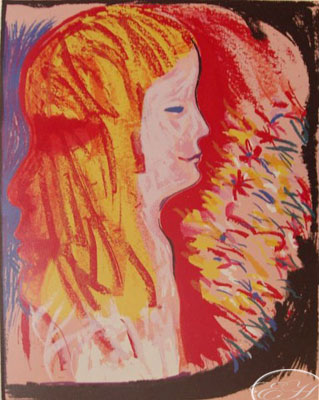 Charles Blackman artwork titled Memories is from his 70th Birthday Celebration limited edition folio.
This work has been sold out other than stock on hand. Charles Blackman Girls, Women, Wives and Mistresses, have played a role in Blackman’s life and the female in her various forms re-appears in his paintings time after time. He created haunting images of grave women and girls, detached from their surroundings, absorbed in daydreams or games and oblivious to reality. Barbara Patterson whom Blackman married in 1951 had impaired sight and her reliance on Blackman’s eyesight sharpened his observation. His empathy with her predicament led him to focus on the face, depicting figures with huge, dark, expressive eyes. “Of these most powerful invocations, the image of women is perhaps the strongest, such that he has painted woman in a fashion rarely ventured by other painters,” writes Nadine Amadio in a book on Blackman. “His paintings of women reach the emotions, the dreams and the inner world of women…” 1997 OBE 1963 Georges Invitation Art Prize, Georges Gallery Melbourne (one painting and one drawing) 1960 Helena Rubin stein Scholarship, Melbourne 1960 George Crouch Prize, Ballarat Fine Art Gallery 1960 Wins prize. A. Shore, The Age (February) 1958 George Crouch Prize, Ballarat Fine Art Gallery 1958 Rowney prize, Richmond Gallery Melbourne Collections National Gallery of Australia, and all state galleries Numerous regional galleries and university collections He is represented in the Musee D’Art in Paris, the Contemporary Art Society of London