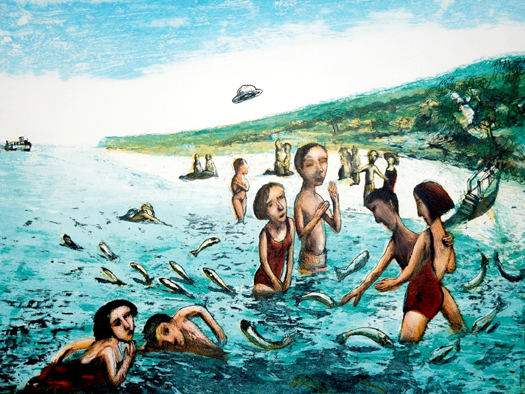 This Original Garry Shead Etching titled Epiphany has an image size 44×59.5 cm, the edition was limited to 99, it was released in 2003 at $1100 and sold out very quickly, and Etching House only has two available from a private collection.

The Fine art work titled Epiphany by Garry Shead was done first as an original oil painting and later a limited edition Etching, the image is a reflection of the area located near Bundeena by the ocean in a National Park, the area is only 15 minutes away by ferry from the hustle of Cronulla and 1 hour by road from the city of Sydney. The Bundeena Ferry leaves Gunnamatta Bay at Cronulla and passes across the entrance of Port hacking stoping at Bundeena Warf, there is a community of 1500 approximately, it has a lovely remote feel and a lovely little beach called Jibin, in the picture of Epiphany, the ferry in the etching is coming along the Jibin foreshore in the background, in the distance is the ocean and Bundeena headland,  the coast heads south and has a beautiful heath land and coastal walk stretching for 2 plus days all the way to the Wollongong area passing threw Thirroul and many other areas many of witch where inspirationally reflected in many of Garry’s Oil paintings of the famous D.H. Lawrence and Kangaroo series. In Epiphany the activity in the water with the people and fish is a clear statement of this wonderful world, there is more meaning behind this work as well, In the case of Annunciation it is similar in location but has a different meaning,