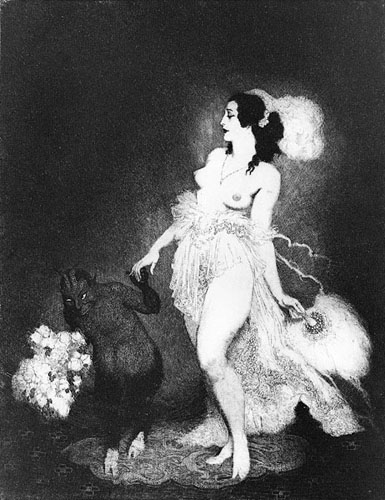 This image is a Norman Lindsay Facsimile Etching, The original Etching, engraving and stipple of Debut may be found in the  Norman Lindsay Etchings: Catalogue Raisonné 2006, cat.208)

Hugh McCrae described his daughter’s reaction when Norman sent him a print of Debut and went on to describe the emotion it aroused in him:

Smee’s delight on my unwrapping Debut … was so spontaneous on her part as to leave no doubt as to the genuine happiness you had given her … it is a jolly conception … the senorita in her absolute beauty, the last of her petals flung open, everything fresh, sweet and resilient … the headdress as downy as smoke … the bouquet of blossoms is twice its own weight on account of the dew in the stamens and it mixes its sweetness with the musky odour which distinguishes a satyr even at a distance of fifty yards or more.

Released in 2000 the limited edition facsimile etching has since sold out and some time ago, it has increased in value and is a popular image by collectors. Image size was 21.9×17.1cm.