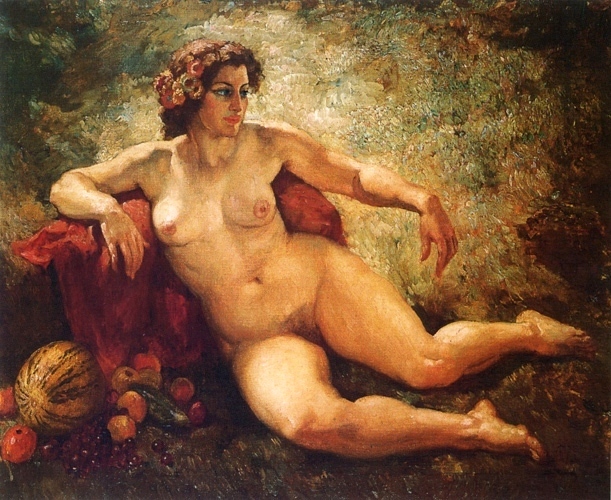 Close bosom-friend of the maturing sun; conspiring with him how to load and bless

With fruit the vines that round the thatch-eaves run; to bend with apples the moss covered cottage-trees, and fill all fruit with ripeness to the core; to swell the gourd, and plump the hazel shells. With a sweet kernel; to set budding more, And still more, later flowers for the bees.

Until they think warm days will never cease; For Summer has overbrimmed their clammy cells.

Norman’s painting Autumn conveys the same feeling, albeit with a reclining nude symbolising Autumn in the picture. The background is misty but the left foreground is mellow with a variety of fruit, apples, grapes and melon. The concentration of colour in the area containing the fruit draws the eye there and follows to the living symbol of Autumn, complete with flowers in her hair.

The model for Autumn is unknown.

Lindsay at Your Peril’ in which he said:

The fact is, in terms of his intentions, the best Lindsay’s are often frank displays of his Utopian sexuality. In his large oil, Summer Reverie 1938, the overt sexuality is entirely consistent with Lindsay’s philosophical beliefs. See the juxtaposition of the mocking apple, a Christian symbol for temptation and downfall. Sold by the Estate of the late Jane Glad – Lindsay’s daughter – for $62,000 against an estimate of $25,000 to $30,000 by auctioneers Warren J Elstub, the work is intellectually reflective of Lindsay’s intentions. And therein lies a golden rule; for an artwork to appreciate – academically and financially – a collector should buy into the artist’s philosophy. If you do not, then I suggest you do not buy the art. Sanitising the artist does no one a favour.